In a previous post we discussed the interpretation of the strength of evidence coming from a Bayes factor. For concreteness, let’s take a binomial data set and suppose we have encountered 62 successes and 38 failures in a sample of 100 trials. We can easily enter these data directly using the JASP Summary Stats Module: 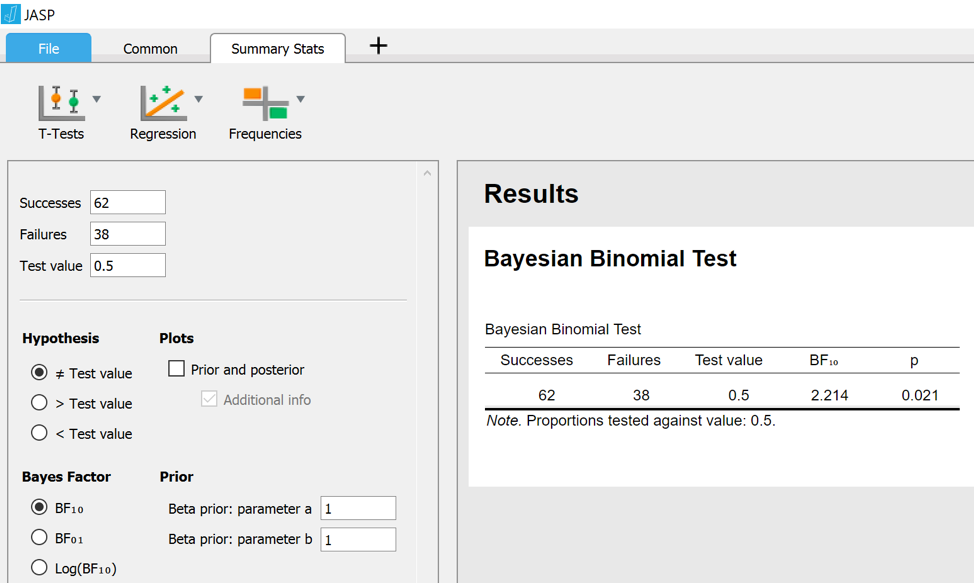 The JASP output shows that for these data, the classical two-sided p-value is .021 (in most applications, researchers would feel entitled to “reject the null hypothesis that the result is due to chance”). The Bayes factor indicates that the data are 2.2 times more likely under the alternative hypothesis H1 than under the null hypothesis H0. The null hypothesis H0 is specified by the number after “Test value”; in this case, H0 says that the binomial rate parameter equals 0.5. The alternative hypothesis is specified by a beta distribution with “parameter a” set to 1 and “parameter b” set to 1 (other distributions may be specified, but that is the topic of a different post). To understand the result more deeply, let’s tick the box “Prior and posterior”, which produces the following graph: 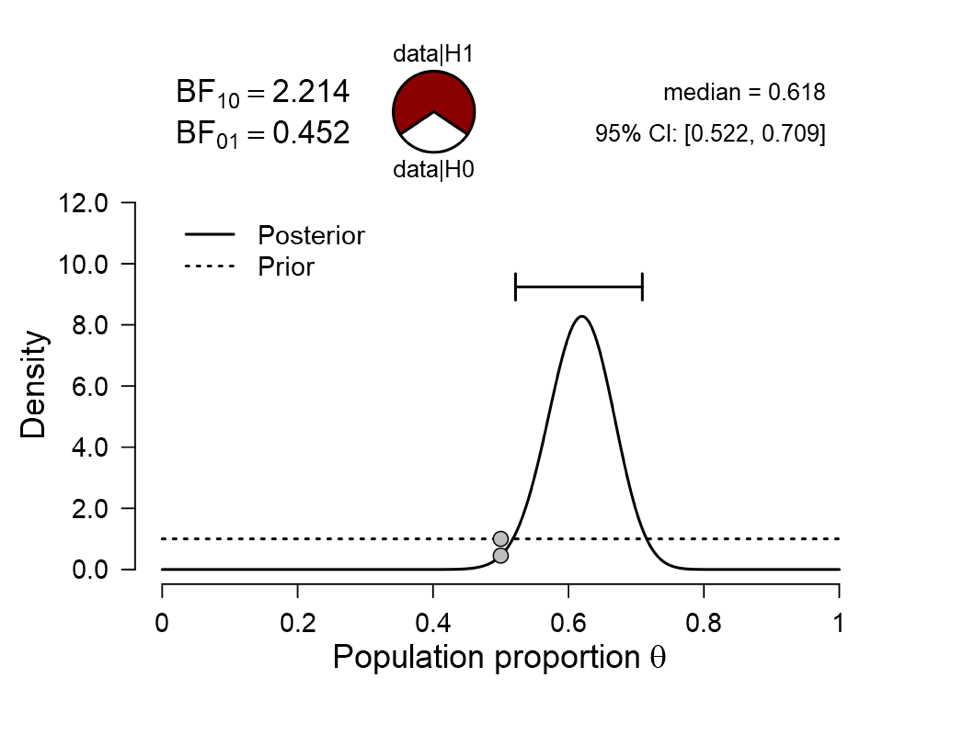 (“all values are equally likely a priori”), we have learned that the most likely values are somewhere in between 0.52 and 0.71. However, in most hypothesis testing scenarios we wish to provide statistical evidence to bolster the claim that the effect exists at all. And in order to cast doubt on the skeptic’s position (which is “take your research elsewhere, we don’t buy it, you are just interpreting noise”) we need to take that position seriously from the start. The alternative hypothesis with its smooth prior distribution does not assign any special value to the skeptics’ hypothesis which states that

, and therefore it would be a mistake to use the posterior distribution under H1 to conclude anything about the validity of H0, tempting as it may be.

Enter the Bayes factor, which considers the predictive adequacy of the skeptics’ H0 (i.e.,

) versus the proponents’ H1 (here:

). And the results on top of the figure show that BF10 = 2.2. How to interpret this number when one is not comfortable with likelihood ratios? One way is to use a heuristic, for instance the rule of thumb categorization proposed by Harold Jeffreys. In the first, 1939, edition of “Theory of Probability” (in my opinion, the best book on statistics, and by a landslide), Jeffreys proposed to deem any Bayes factor lower than

“not worth more than a bare comment” (p. 357). Another way is to transform the Bayes factor to a probability, assuming H0 and H1 are equally probable a priori. For instance, H1 was at 50% before seeing the data; after seeing the data, that probability has increased to

%, leaving a substantial 31% for H0. But even these percentages may not drive home, in an intuitive, visceral way, how little evidence this really is. In order to help people interpret the percentages, JASP presents a “pizza plot” on top of the graph.

In the pizza plot, the red “pepperoni” slice corresponds to the 69% for H1, and the white “mozzarella” slice corresponds to the 31% for H0. As mentioned in the earlier post: “To feel how much evidence this is, we may mentally execute the “Pizza-poke Assessment of the Weight of evidence” (PAW): if you pretend to poke your finger blindly in the pizza, how surprised are you if that finger returns covered in the non-dominant topping?” In this case, you poke your finger onto the pizza and it comes back covered in mozzarella. Your lack of imagined surprise means that you should be wary of interpreting the data as strong evidence against the null hypothesis. More generally, note how much more information is communicated in the JASP graph compared to the standard frequentist conclusion “p=.021” (and, when you’re lucky, a 95% confidence interval on the parameter). 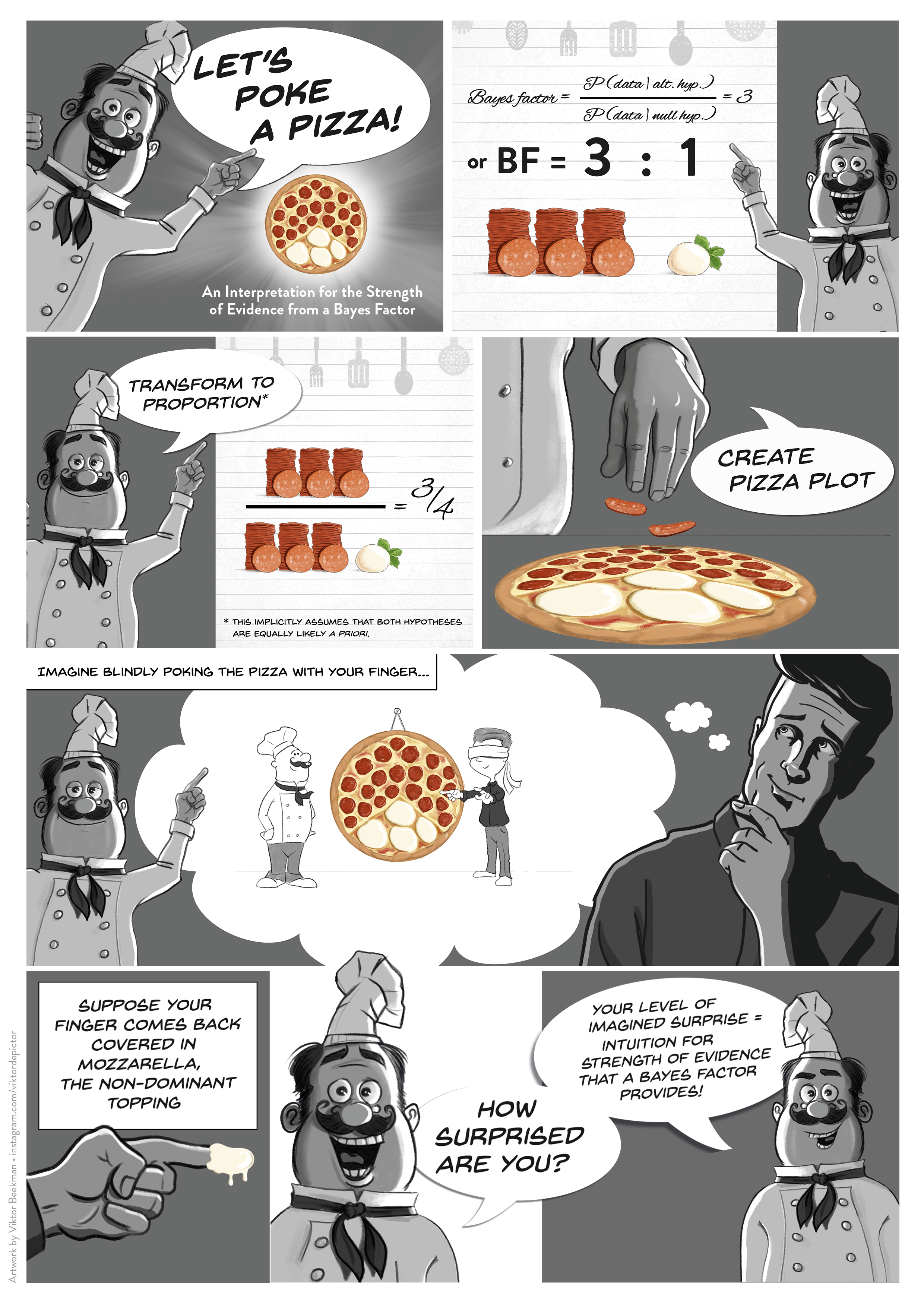 Ly, A., Raj, A., Marsman, M., Etz, A., & Wagenmakers, E.-J. (in press). Bayesian reanalyses from summary statistics: A guide for academic consumers. Advances in Methods and Practices in Psychological Science.