“By seeking and blundering we learn.”

Bayesian methods have never been more popular than they are today. In the field of statistics, Bayesian procedures are mainstream, and have been so for at least two decades. Applied fields such as psychology, medicine, economy, and biology are slow to catch up, but in general researchers now view Bayesian methods with sympathy rather than with suspicion (e.g., McGrayne 2011).

The ebb and flow of appreciation for Bayesian procedures can be explained by a single dominant factor: pragmatism. In the early days of statistics, the only Bayesian models that could be applied to data were necessarily simple – the more complex, more interesting, and more appropriate models escaped the mathematically demanding derivations that Bayes’ rule required. This meant that unwary researchers who accepted the Bayesian theoretical outlook effectively painted themselves into a corner as far as practical application was concerned. How convenient then that the Bayesian paradigm was “absolutely disproved” (Peirce 1901, as reprinted in Eisele 1985, p. 748); how reassuring that it would “break down at every point” (Venn 1888, p. 121); and how comforting that it was deemed “utterly unacceptable” (Popper 1959, p. 150).

Figure 1.1: Contrary to popular belief, this is probably not Thomas Bayes (c. 1701-1761). For details see the discusion by Prof. David R. Bellhouse.

All of this changed with the advent of Markov chain Monte Carlo (MCMC; Gilks et al. 1996, van Ravenzwaaij et al. in press), a set of numerical techniques that allows users to replace mathematical so- phistication with raw computing power. Instead of having to derive a posterior distribution, MCMC draws many samples from it, and the resulting histogram approximates the posterior distribution to arbitrary precision (i.e., if you want a more precise approximation, just have the algorithm draw more samples). And it gets better. Probabilistic programming languages such as BUGS (Lunn et al. 2012), JAGS (Plummer 2003), and Stan (Carpenter et al. 2017) circumvent the need to code your own, problem-specific MCMC algorithm; instead, users can specify a complex model in only a few lines. One random example, adorned with comments that follow the hashtag: 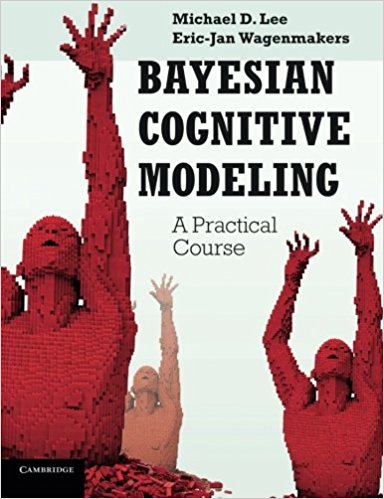 The specifics of the above model are irrelevant; the model syntax is provided here only to give an impression of how easy it is to define a relatively complex model in a few lines of code. Granted, you have to know which lines of code, but that challenge is on a more conceptual plane. A program like JAGS accepts the model syntax, automatically executes an MCMC algorithm, and then produces samples from the joint posterior. Bayesian magic!

All of the probabilistic programming languages come with a series of hard-wired densities and functions (e.g., dnorm for the density of a normal distribution). These can be thought of as building blocks similar to lego. With these ‘lego blocks’, users can construct models that are limited only by their imagination. MCMC turned the world upside down: suddenly it became evident that, by clinging to their inferential framework, it had been the frequentists, not the Bayesians, who had painted themselves into a pragmatically unenviable corner. Stuck with an awkward philosophy of science and an inflexible set of tools to boot, the decline of frequentist statistics seems inevitable.1 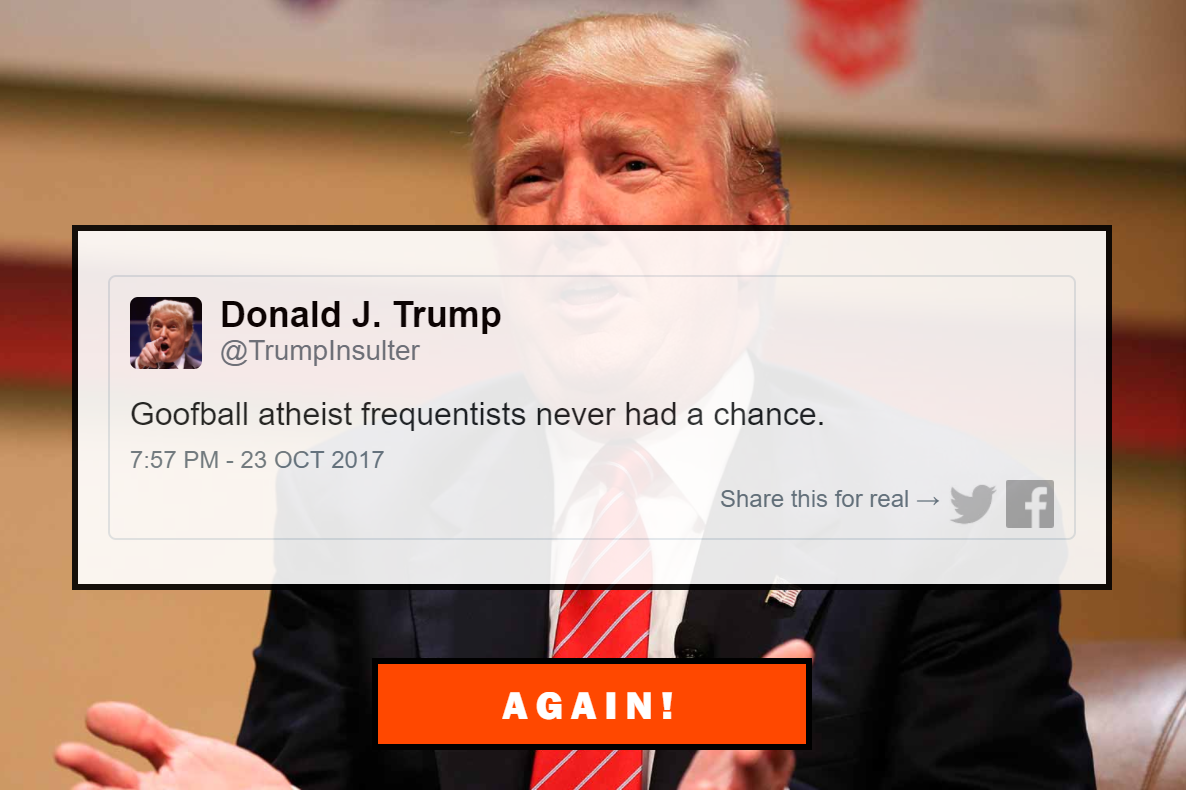 But there are dangers. The ease of practical application may blind novices to the theoretical subtleties of Bayesian inference, causing persistent misinterpretations. And statistical experience need not alleviate the problem: when dyed-in-the-wool frequentists are struggling to get to grips with Bayesian concepts that are alien to them, an initial phase of confusion is often followed by a second phase of misinterpretation. This second stage can sometimes last a lifetime. Bayesian proponents may be tempted to think that fundamental misconceptions are a curse that affects only frequentist statistics, whereas Bayesian concepts are intuitive and straightforward; unfortunately –and despite what the Trump insult generator will tell you about frequentists (‘hokey garbage frequentists’)– that is fake news. We speak from experience when we say that even researchers with a decent background in Bayesian theory can fall prey to misinterpretations. Statistics, it appears, is surprisingly difficult.

The other interesting statistic is the Bayes Factor, 1.15. It is just the ratio of the data likelihoods given the null versus the alternative hypothesis. So we can say that the alternative hypothesis is 15% more likely than the null. We don’t have a way to make a statement like that using classical methods.” (https://developer.ibm.com/predictiveanalytics/2017/ 08/18/new- spss- statistics- version- 25- bayesian- procedures/)2

Jon Peck is clearly a smart person with the time and skill to implement Bayesian procedures in one of the world’s most profitable computer programs. Nevertheless, his interpretation of the Bayes factor is incorrect, and not in a subtle way. First, a Bayes factor of 1.15 indicates that the observed data are 1.15 times more likely to occur under H1 than under H0; it most emphatically does not mean that H1 is 1.15 times more likely than H0. In order to make a statement about the (relative) posterior probability of the hypotheses, one needs to take into account their (relative) prior plausibility; H1 could be ‘plants grow faster with access to water and sunlight’, or it could be ‘plants grow faster when you pray for their health to Dewi Sri’. Because the prior plausibility for these hypotheses differs, so will the posterior plausibility, particularly when the observations turn out to be identical and the Bayes factor in both cases equals 1.15.

The goal of this series of blog posts is simple. We wish to provide a comprehensive list of misconceptions concerning Bayesian inference. In order to demonstrate that we are not just making it up as we go along, we have tried to cite the relevant literature for background information, and we have illustrated our points with concrete examples. Some of the misconceptions that we will discuss are our own, and correcting them has deepened our appreciation for the elegance and coherence of the Bayesian paradigm.

We hope the intended blog posts are useful for students, for beginning Bayesians, and for those who have to review Bayesian manuscripts. We also hope the posts will help clear up some of the confusion that inevitably arises whenever Bayesian statistics is discussed online. We imagine that, when confronted with a common Bayesian misconception, one may just link to a post, along the lines of ‘Incorrect. This is misconception #44.’ Doing so will not win popularity contests, but you will be right, and that’s all that matters — in the long run, at least.

1 We grudgingly admit that there exist some statistical scenarios in which frequentist procedures are relatively flexible.

Lee, M. D., & Wagenmakers, E.-J. (2013). Bayesian Cognitive Modeling: A Practical Course. Cambridge: Cambridge University Press. A hands-on book with many examples. The material in this book forms the basis of an annual week-long workshop in Amsterdam (organized in August, directly before or after the JASP workshop).

McGrayne, S. B. (2011). The Theory that Would not Die: How Bayes’ Rule Cracked the Enigma Code, Hunted Down Russian Submarines, and Emerged Triumphant from Two Centuries of Controversy. New Haven, CT: Yale University Press.

Alexander is a PhD student in the department of cognitive sciences at the University of California, Irvine.

Wolf Vanpaemel is associate professor at the Research Group of Quantitative Psychology at the University of Leuven.