Posterior Bayes factors are a good idea: they provide a measure of evidence but are relatively unaffected by the shape of the prior distribution.

Posterior Bayes factors use the data twice, effectively biasing the outcome in favor of the more complex model.

The standard Bayes factor is the ratio of predictive performance between two rival models. For each model

is computed as the likelihood for the observed data, averaged over the prior distribution for the model parameters

. Suppressing the dependence on the model, this yields

. Note that, as the words imply, “predictions” are generated from the “prior”. The consequence, of course, is that the shape of the prior distribution influences the predictions, and thereby the Bayes factor. Some consider this prior dependence to be a severe limitation; indeed, it would be more convenient if the observed data could be used to assist the models in making predictions — after all, it is easier to make “predictions” about the past than about the future.

. This procedure was proposed by Aitkin (1991). Several discussants of the Aitkin paper pointed out that the method uses the data twice, inviting inferential absurdities. To see the double use of the data, note that the posterior distribution

, such that the likelihood

As the rebuttal shows, Aitkin was not impressed, neither by the general argument nor by the concrete examples. Here we provide another example of posterior Bayes factors in action. Consider a binomial problem where

indicates a general law (“all apples grow on apple trees”; “all electrically neutral atoms have an equal number of protons and electrons”; “all zombies are hungry”; “all ravens are black”; “all even integers greater than two are the sum of two prime numbers”). Hence,

. Our alternative model relaxes the restriction that

and assigns it a prior distribution; for mathematical convenience, here we use a uniform prior from 0 to 1, that is,

. Furthermore, assume we only encounter confirmatory instances, that is, observations consistent with

. In this situation, every confirmatory instance ought to increase our confidence in the general law

is the number of successes,

, the number of failures,

the number of attempts, and

the gamma function, which for integers reduces to the factorial function:

We then simplify this equation by inserting the following information: (1)

(from the definition of

, because only successes are observed. This leaves:

If we assume that

(the uniform prior for

: that is, every time a confirmatory instance is observed, the Bayes factor in favor of the general law increases by one. Thus, the standard Bayes factor generates the fundamental inductive pattern. In order to examine what the posterior Bayes factor produces, note that a

prior distribution combined with

posterior distribution. This means that, under the starting assumption that

we can use the general equation by plugging in the posterior

instead of the prior

are deemed equally plausible a priori, an infinite number of observations perfectly predicted by

manages to raise the probability of the general law from

, for a miniscule 2% increase.

Table 1. As the number of confirmatory instances

provides weak and bounded support for the binomial general law

over the alternative model

The result from Table 1 can be easily confirmed using the SumStat module in JASP (Ly et al., 2018 ). The screenshot below shows the results obtained when successes

, the test value is

, and the prior distribution is set to

. The Bayes factor in favor of the general law 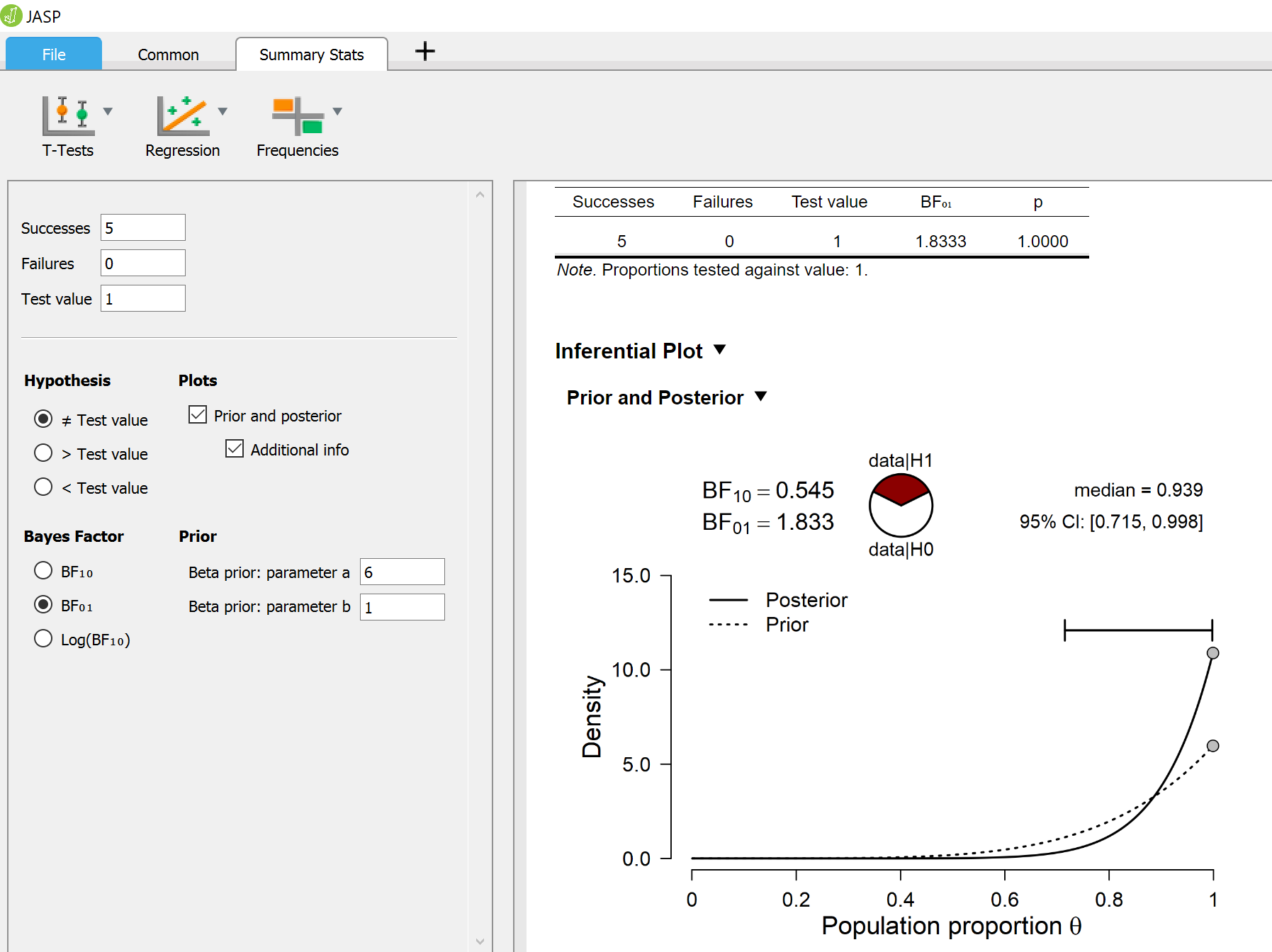 As demonstrated above, posterior Bayes factors violate the fundamental inductive pattern. No matter how many apples one sees that grow from apple trees, no matter how many even integers greater than two are inspected that turn out to be the sum of two prime numbers, our confidence in these general laws would be bounded, and would forever remain caught in the evidential region that Jeffreys (1961, appendix B) called “not worth more than a bare mention”. This is preposterous.

In sum, we believe that models, hypotheses, and theories need to be assessed by the predictions that they make. Predictions, as the word suggests, need to come from the prior, not from the posterior. The famous Danish maxim tells us that “prediction is hard, particularly about the future”; the difficulty is real, but this does not license us to abandon the enterprise and start assessing our theories by postdiction instead.

1 For a general beta

prior, the limit of the posterior Bayes factor is

. See appendix for a derivation.

observations are all successes. The posterior Bayes factor (Aitkin, 1991) for comparing the general law hypothesis

The limit of the posterior Bayes factor as

goes to infinity is given by:

where we used the well-known result that

Cicero and the Greeks on Necessity and Fortune

February 21 - 2018
Cicero eloquently summarized the philosophical position that the universe is deterministic – all events are preordained, either by nature or…