In the previous post I discussed the famous de Finettti (1974) preface, containing the iconic statement “PROBABILITY DOES NOT EXIST”. As mentioned in that post, many statisticians and philosophers of science believe that, together with Frank Ramsey, de Finetti was the first real subjectivist. Fellow subjectivist Dennis Lindley, for instance, always expressed a fawning admiration for de Finetti, calling him “the great genius of probability” (Lindley, 2000, p. 336).

But was de Finetti really the first subjectivist? I am not sure, especially after reading An Essay on Probabilities and on Their Application to Life Contingencies and Insurance Offices, published by Augustus de Morgan in 1838 (!). Here is the cover of the book: 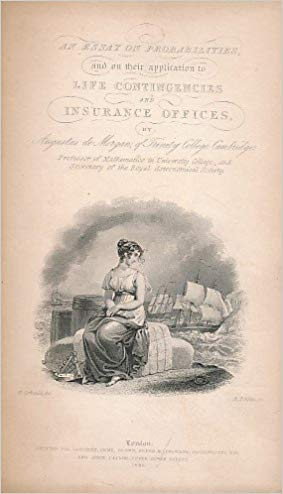 The engraving on the title page is most likely by “Finden” (bottom right text) based on a painting by “Corbould” (bottom left text). I have been unable to find the painting or engraving online: any clues to the picture’s identity would be much appreciated! Balazs Aczel suggested that the scene is similar to the fifth picture here. Also noteworthy is that de Morgan writes his own name with a lower case “de”, not upper case “De”, as is now universally done. But a name starting with “de” is not the only similarity between de Morgan and de Finetti! Specifically, de Morgan’s conceptualization of probability seems very subjectivist. First, de Morgan proposes that probability may be measured, at least in theory, by what I call de Morgan’s alphabet:

“On this we remark, firstly, that by it we feel sensible of our assent and dissent to propositions derived in very different ways, being a sort of impression which is of the same kind in all. To make this clearer, observe the following:—A merchant has freighted a ship, which he expects (is not certain) will arrive at her port. Now suppose a lottery, in which it is quite certain that every ticket is marked with a letter, and that all the letters enter in equal numbers. If I ask him, which is most probable, that his ship will come into port, or that he will draw no letter if he draw, he will answer, unquestionably, the first, for the second will certainly not happen. If I ask, again, which is most probable, that his ship will arrive, or that he will, if he draw, draw either a, or b, or c, …… or x, or y, or z, he will answer, the second, for it is quite certain. Now suppose I write the following series of assertions:—

and making him observe that there are, of their kind, propositions of all degrees of probability, from that which cannot be, to that which must be, I ask him to put the assertion that his ship will arrive, in its proper place among them. This he will perhaps not be able to do, not because he feels that there is no proper place, but because he does not know how to estimate the force of his impressions in ordinary cases. If the voyage were from London Bridge to Gravesend, he would (no steamers being supposed) place it between the last and last but one: if it were a trial of the north-west passage, he would place it much nearer the beginning; but he would find difficulty in assigning, within a place or two, where it should be. All this time he is attempting to compare the magnitude of two very different kinds (as to the sources whence they come) of assent or dissent; and he shows by the attempt that he believes them to be of the same sort. He would never try to place the weight of his ship in its proper position in a table of times of high water.” (de Morgan, 1838, pp. 4-5).

Such a personal quantification of belief has a distinctive subjective feel; this impression is strengthened by a fragment just a few pages later:

“Probability is the feeling of the mind, not the inherent property of a set of circumstances. (…) Say that the question is, whether a red or a green ball shall be drawn, and suppose that A feels certain that all the balls are red, B, that all are green, while C knows nothing whatever about the matter. We have here, then, in reference to the drawing of a red ball, absolute certainty for or against, with absolute indifference, in three different persons, coming under different previous impressions. And thus we see that the real probabilities may be different to different persons. [italics mine] The abomination called intolerance, in most cases in which it is accompanied by sincerity, arises from inability to see this distinction. (…) In the mean time, we bring it forward as not the least of the advantages of this study, that it has a tendency constantly to keep before the mind considerations necessarily corrective of one of the most fearful taints of our intellect.” (de Morgan, 1838, pp. 7-8)

Two more links exist between de Morgan and de Finetti. First, de Morgan’s 1838 was written for actuaries, and de Finetti was an actuary. Second, in his 1974 preface, when de Finetti lists the researchers who influenced him, he explicitly acknowledges de Morgan: “I had some indirect knowledge of De Morgan” (p. xiii).

Because I had always taken de Morgan to be an apostle of Laplace, and I had always taken Laplace to be the proponent of “objective” uniform prior distributions, it was a surprise to me how much de Morgan emphasized the individualistic and subjectivist notion of probability.

de Morgan, A. (1838). An Essay on Probabilities and on Their Application to Life Contingencies and Insurance Offices. London: Longman. Freely available at https://archive.org/details/134257988