Reliability analysis aims to disentangle the amount of variance of a test score that is due to systematic influences (i.e., true-score variance) from the variance that is due to random influences (i.e., error-score variance; Lord & Novick, 1968).
When one estimates a parameter such as a reliability coefficient, the point estimate can be accompanied by an uncertainty interval. In the context of reliability analysis, substantive researchers almost always ignore uncertainty intervals and present only point estimates. This common practice disregards sampling error and the associated estimation uncertainty and should be seen as highly problematic. In this preprint, we show how the Bayesian credible interval can provide researchers with a flexible and straightforward method to quantify the uncertainty of point estimates in a reliability analysis.

The results suggest that the Bayesian reliability coefficients perform equally well as the frequentist ones. The figure below depicts the simulation results for the condition with medium correlations among items. The endpoints of the bars are the average 95% uncertainty interval limits. The 25%- and 75%-quartiles are indicated with vertical line segments. 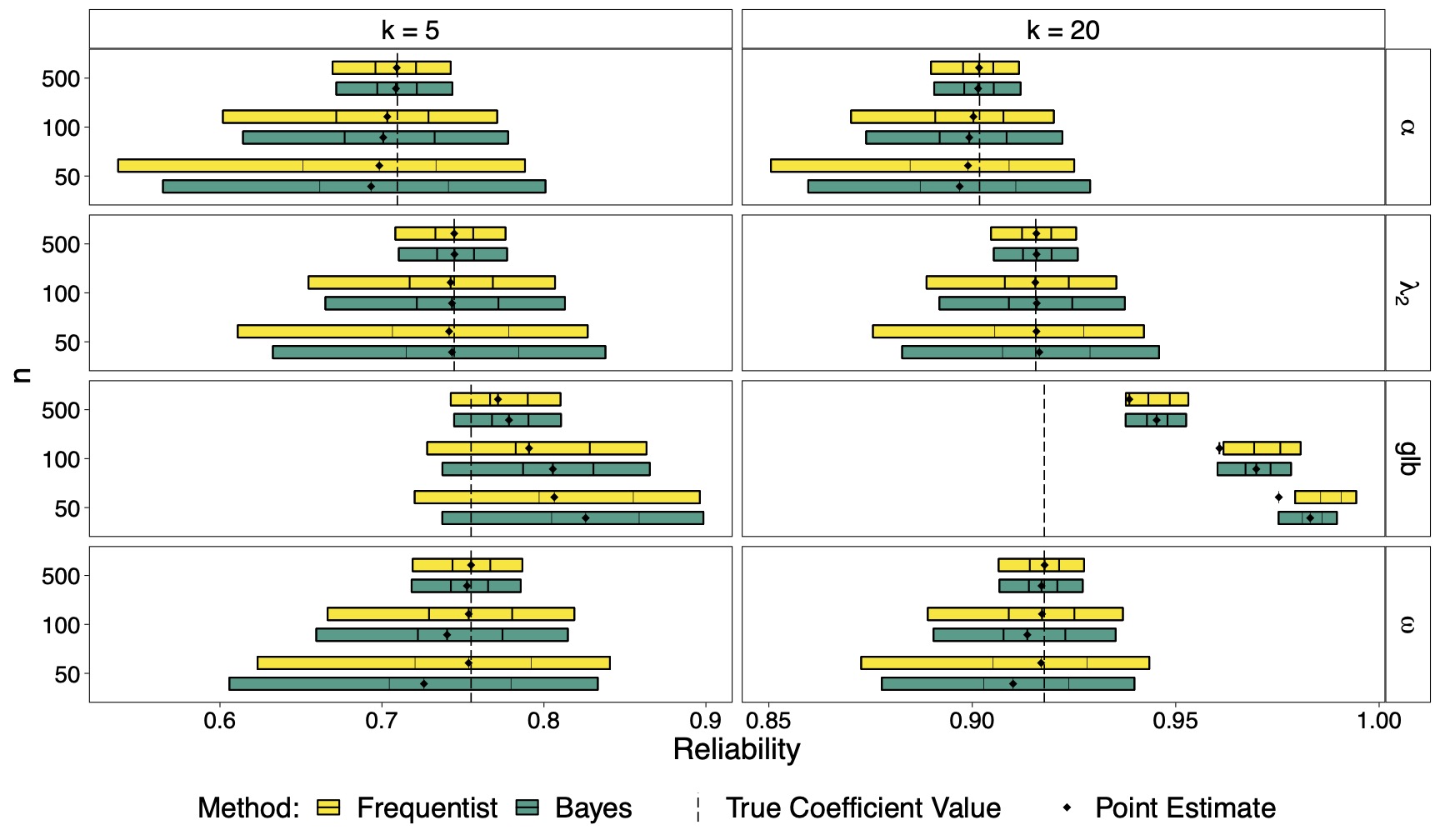 The below figures show the reliability results of an empirical data set from Cavalini (1992) with eight items and sample size of n = 828, and n = 100 randomly chosen observations. Depicted are posterior distributions of estimators with dotted prior densities and 95% credible interval bars. One can easily acknowledge the change in the uncertainty of reliability values when the sample size increases.

The Bayesian reliability estimation adds an essential measure of uncertainty to simple point-estimated coefficients. Adequate credible intervals for single-test reliability estimates can be easily obtained applying the procedures described in the preprint, and as implemented in the R-package Bayesrel. Whereas the R-package addresses substantive researchers who have some experience in programming, we admit that it will probably not reach scientists whose software experiences are limited to graphical user interface programs such as SPSS. For this reason we have implemented the Bayesian reliability coefficients in the open-source statistical software JASP (JASP Team, 2020). Whereas we cannot stress the importance of reporting uncertainty enough, the question of the appropriateness of certain reliability measures cannot be answered by the Bayesian approach. No single reliability estimate can be generally recommended over all others. Nonetheless, practitioners are faced with the decision which reliability estimates to compute and report. Based on a single test administration the procedure should involve an assessment of dimensionality. Ideally, practitioners report multiple reliability coefficients with an accompanying measure of uncertainty, that is based on the posterior distribution.