The previous post gave a demonstration of Bayes factor coherence. Specifically, the post considered a test for a binomial parameter

against the alternative hypothesis

(i.e., the uniform distribution from 0 to 1). For fictitious data composed of 5 successes and 5 failures, the Bayes factor equals about 2.71 in favor of

, as required. This is coherent, and the previous blog post argued that this coherence is due to the fact that the Bayes factor is sensitive to the prior distribution, as the prior encodes the knowledge from the past to generate predictions about the future.

Bayes factor detractors may argue that batches A and B were cherry-picked, and that this particular sequence of successes and failures is relatively unlikely under the models considered. This objection is both correct and irrelevant. The pattern of coherence is entirely general. To appreciate this, we first write the Bayes factor on a batch-by-batch basis, using the law of conditional probability:

Applying the log transform to our example data yields the result visualized in the figure below, which may be termed a “Bayes factor coherence plot”: 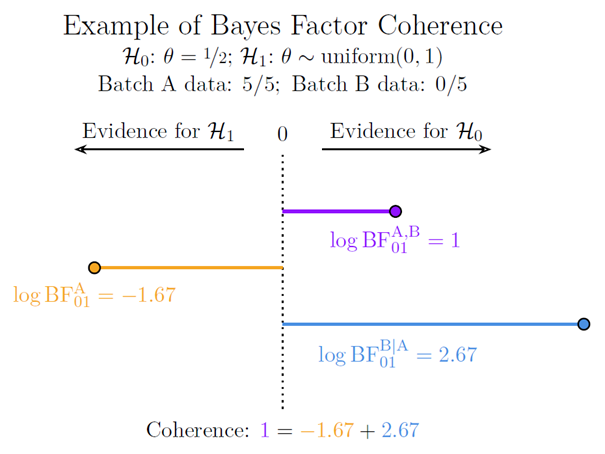 Let’s unpack. The purple line on top indicates the logarithm of the Bayes factor for the complete data set, that is,

. The orange line in the middle indicates the logarithm of the Bayes factor for the batch A data, that is,

. Note that the Bayes factor

), which means that the logarithm is negative – the orange line therefore extends to the left rather than the right. The blue line on the bottom indicates the logarithm of the Bayes factor for the batch B data, that is,

Expressed in the usual way, coherence takes a multiplicative form:

. After the log transform, coherence is expressed through addition:

. In our example, the complete data set yielded evidence in favor of

, whereas the data from batch A yielded evidence against

– mind the Bayes factor subscripts here) we have a “Bayesian evidentiary boomerang”: the batch A data may favor

, but the posterior distribution after batch A yields poor predictions for the data from batch B; the batch A data are not representative of the whole and they have wrong-footed

): inevitably, the evidence trajectory reverses its course and ends up at exactly the same location that is occupied by the “all-data-at-once” Bayes factor.

We may entertain a different division of the data into batches A and B, or we may specify more than two batches – we may even specify each batch to contain a single observation. However the data are subdivided, the end result is always coherent in the sense displayed in the coherence plot: the log Bayes factors for the individual batches are simply added and always yield a result identical to the log Bayes factor for the complete data set.

The main point of this series of blog posts is not to argue that Bayes factors are coherent (even though they are); it is also not to suggest that such coherence is elegant (even though I believe it is); rather, the main point is to demonstrate that the coherence comes about because the Bayes factors are sensitive to the prior distribution. This is a perfect, Goldilocks kind of sensitivity: not too little, not too much, but exactly the right amount in order to ensure that the method does not fall prey to internal contradictions.