WARNING: This post starts with two chess studies. They are both magnificent, but if you don’t play chess you might want to skip them. I thank Ulrike Fischer for creating the awesome LaTeX package “chessboard”. NB. The idea discussed here also occurs in Haaf et al. (2019), the topic of a previous post.

The game of chess is both an art, a science, and a sport. In practical over-the-board play, the element of art usually takes a backseat to more practical aspects such as opening preparation and positional evaluation. In endgame study composition, on the other hand, the art aspect reigns supreme. One of my favorite themes in chess endgame study composition is the Bristol clearance. Here is the study from 1861 that gave the theme it’s name: 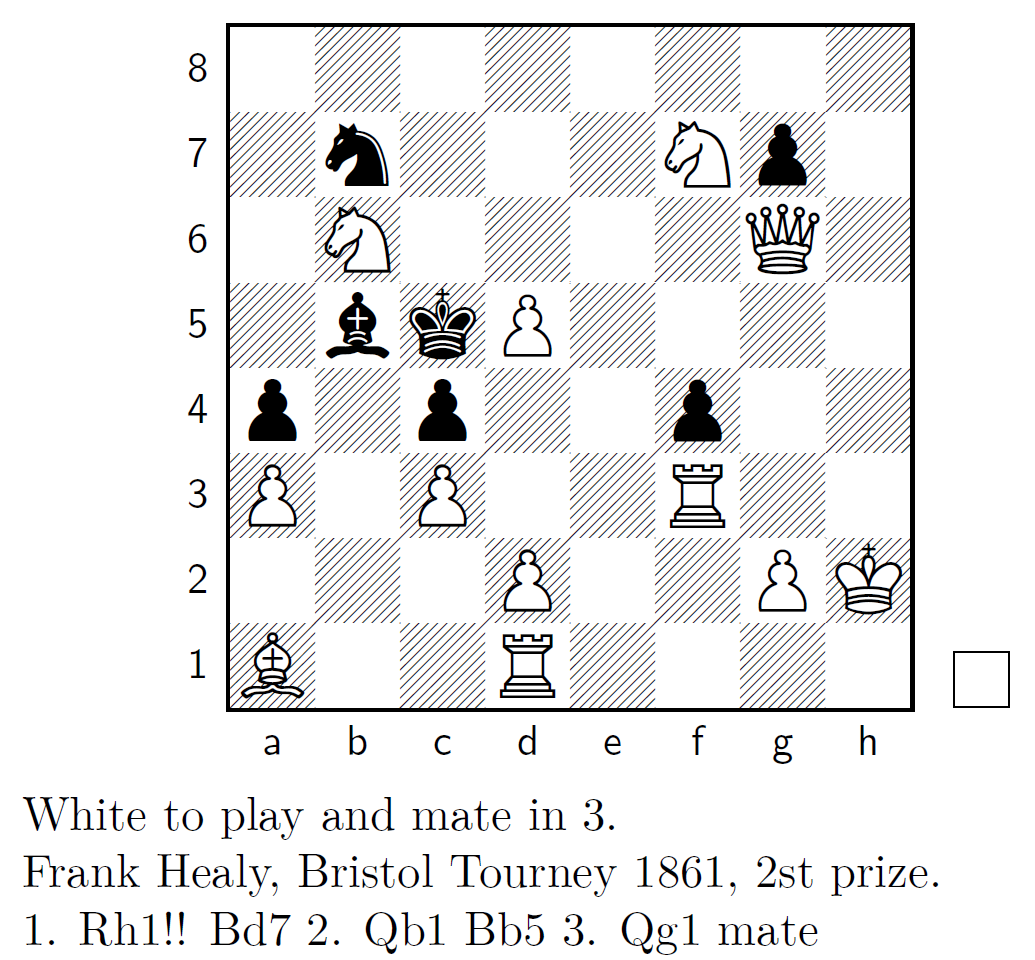 For those who don’t play the game, the only way to fulfill the assignment (“White to play and mate in three moves”) was to start by tucking the rook hopelessly away in the corner, making room for the queen to follow. Tucking away the rook is paradoxical, and the move can only be understood by realizing that, in this particular position, the rook is actually a nuisance rather than an asset. The rook prevents the queen from traveling to g1, and white would actually prefer to play the position without the rook. But taking your own pieces off the board is not allowed, and so White does the next-best thing: ban the rook to the edge, where it cannot interfere with the long strides of the queen.

As an aside, the starting position contains a huge clue as to the solution: the awkward bishop on a1, which just eyes its own pawn on c3 and clearly cannot serve a constructive purpose in mating the Black king. So why is it there? Well, if it were missing White could use the free square for its rook, playing 1. Ra1, an unattractive alternative solution or “dual”.

Since its inception, the Bristol theme has appealed to several composers. One of the most famous, Leonid Kubbel, created the following work of art: 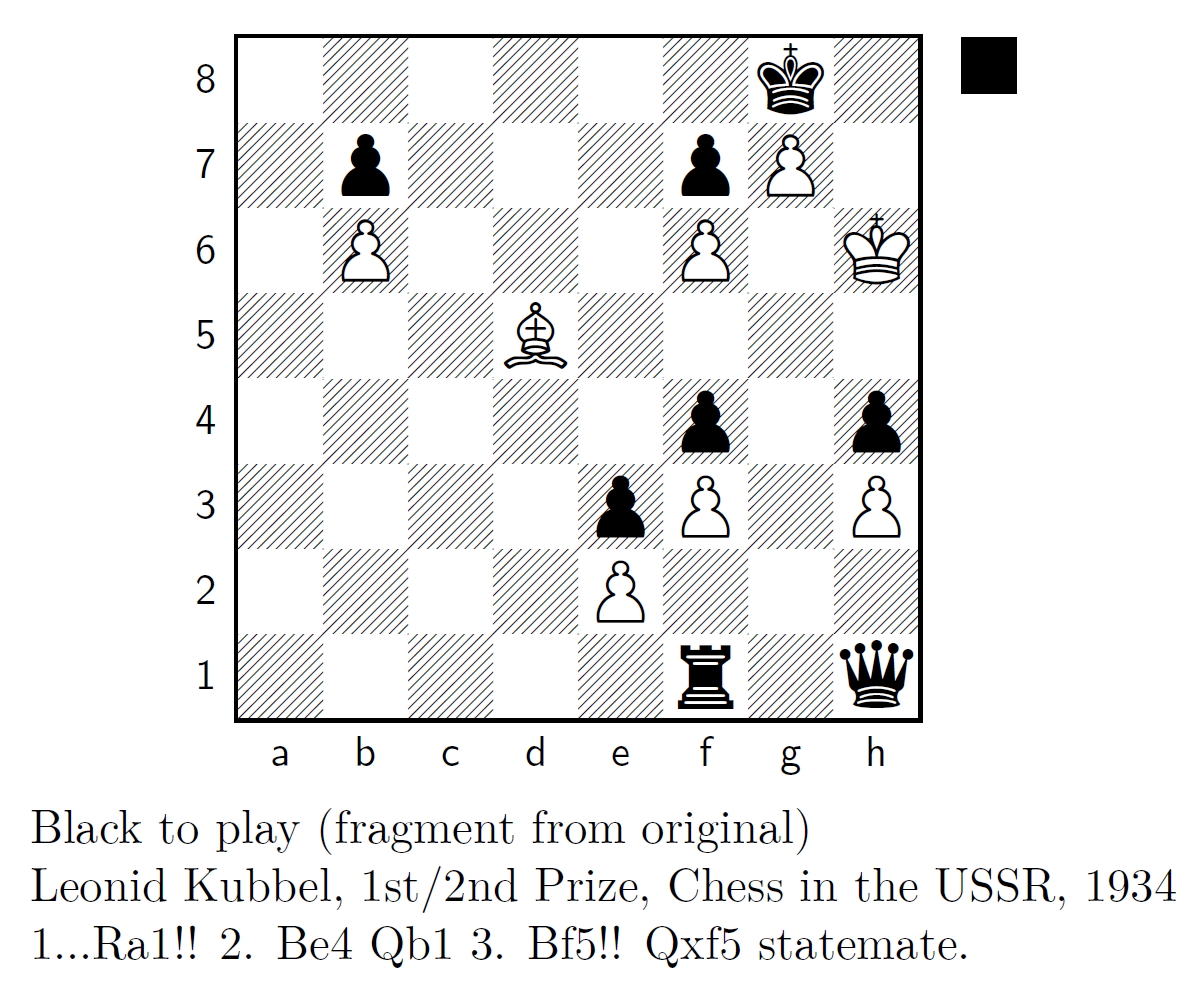 After some foreplay that does not concern us here, the position in the diagram was reached. Black has a huge material advantage (queen and rook versus a lone bishop) but his pieces are boxed in and White has the terrible threat of transferring his bishop to h7 via e4, delivering checkmate. However, the Bristol theme comes to the rescue: 1… Ra1 tucks the rook into the corner, such that, after White initiates his intended manoeuvre 2. Be4 (threatening mate on h7), black counters with 2…Qb1!! Black offers the queen in order to prevent mate, a gift that White cannot accept, for after 3. Bxb1?? Rxb1 Black is a full rook to the good. (I mention this line because it shows that the Bristolian rook actually fulfills a function in this study, namely to defend the queen once it has arrived on b1) Suddenly it looks as if Black is completely winning. In dire straits, White comes up with a miraculous save: 3. Bf5!!, offering White’s only remaining piece. Black has no choice but to accept, yet after 3…Qxf5 the results is stalemate, and consequently a draw.

In both studies, it feels as if the Bristolian rook and queen are connected by a rubber band: the rook moves ahead, stretching the rubber band, and, after the rook has landed on its square, the rubber band pulls in the queen to follow suit.

What Does This Have To Do With Statistics?

I am currently reading Lehmann (2011), in which it is mentioned that Fisher argued, in the second edition of his famous “Statistical Methods for Research Workers” that estimation of a parameter needs to be preceded by a test to confirm that the parameter is not zero. Lehmann:

“Before discussing the estimation of

, Fisher notes that, “It is a useful preliminary before making a statistical estimate…to test if there is anything to justify estimation at all.” He therefore tests for independence (which would specify the value of

) and reject the hypothesis. He then points out that, “Nothing is easier than to invent methods of estimation,” and proposes to consider four estimates of

This idea was emphasized by Harold Jeffreys throughout his work. In a recent paper for Psychonomic Bulletin & Review, we summarized Jeffreys’s thinking as follows:

“In his monograph ‘Theory of Probability’, Bayesian pioneer Harold Jeffreys makes a sharp distinction between estimation and testing, discussing each in separate chapters: “In the problems of the last two chapters we were concerned with the estimation of the parameters in a law, the form of the law itself being given. We are now concerned with the more difficult question: in what circumstances do observations support a change of the form of the law itself? This question is really logically prior to the estimation of the parameters, since the estimation problem presupposes that the parameters are relevant.” (Jeffreys, 1961, p. 245; italics ours). The same sentiment was recently expressed by Simonsohn (2015b, p. 559): “Only once we are past asking whether a phenomenon exists at all and we come to accept it as qualitatively correct may we become concerned with estimating its magnitude more precisely. Before lines of inquiry arrive at the privileged position of having identified a phenomenon that is generally accepted as qualitatively correct, researchers require tools to help them distinguish between those that are and are not likely to get there.” (…) “In light of these and other remarks, Jeffreys’s maxim may be stated as follows: `Do not try to estimate something until you are sure there is something to be estimated.’ ”

Fisher’s comments suggest that the correct name for this rule is the Jeffreys-Fisher maxim.

So what does this have to do with the Bristol theme in chess? Well, in the studies we considered, the Bristolian rook plays the role of the null hypothesis. We are often eager to estimate parameters or make predictions (i.e., bring the queen into action), but before we can do so we need to waste a move in getting the skeptical rook out of the way. Yes, that rook is annoying; yes, we may be better off without it. But it is nonetheless there and we have to deal with it. Claiming that rooks do not exist will not make a skeptic blink twice: she will simply stick to her guns and argue that by moving the queen without first getting rid of the rook, you violated the basic rules of the game.