Some important research questions require the ability to find evidence for two conditions being practically equivalent. This is impossible to accomplish within the traditional frequentist null hypothesis significance testing framework; hence, other methodologies must be utilized. We explain and illustrate three approaches for finding evidence for equivalence: The frequentist two one-sided tests procedure (TOST), the Bayesian highest density interval region of practical equivalence procedure (HDI-ROPE), and the Bayes factor interval null procedure (BF). We compare the classification performances of these three approaches for various plausible scenarios. The results indicate that the BF approach compares favorably to the other two approaches in terms of statistical power. Critically, compared to the BF procedure, the TOST procedure and the HDI-ROPE procedure have limited discrimination capabilities when the sample size is relatively small: specifically, in order to be practically useful, these two methods generally require over 250 cases within each condition when rather large equivalence margins of approximately 0.2 or 0.3 are used; for smaller equivalence margins even more cases are required. Because of these results, we recommend that researchers rely more on the BF approach for quantifying evidence for equivalence, especially for studies that are constrained on sample size.

Science is dominated by a quest for effects. Does a certain drug work better than a placebo? Are pictures containing animals more memorable than pictures without animals? These attempts to demonstrate the presence of effects are partly due to the statistical approach that is traditionally employed to make inferences. This framework – null hypothesis significance testing (NHST) – only allows researchers to find evidence against but not in favour of the null hypothesis that there is no effect. In certain situations, however, it is worthwhile to examine whether there is evidence for the absence of an effect. For example, biomedical sciences often seek to establish equal effectiveness of a new versus an existing drug or biologic. The new drug might have fewer side effects and would therefore be preferred even if it is only as effective as the old one. Answering questions about the absence of an effect requires other tools than classical NHST. We compared three such tools: The frequentist two one-sided tests approach (TOST; e.g., Schuirmann, 1987), the Bayesian highest density interval region of practical equivalence approach (HDI-ROPE; e.g., Kruschke, 2018), and the Bayes factor interval null approach (BF; e.g., Morey & Rouder, 2011).

We estimated statistical power and the type I error rate for various plausible scenarios using an analytical approach for TOST and a simulation approach for HDI-ROPE and BF. The scenarios were defined by three global parameters:

In addition, for the Bayesian approaches we placed a Cauchy prior on the population effect size with a scale parameter of r = {0.5/√2,1/√2,2/√2}. Lastly, for the BF approach specifically, we used Bayes factor thresholds of BFthr = {3,10}. 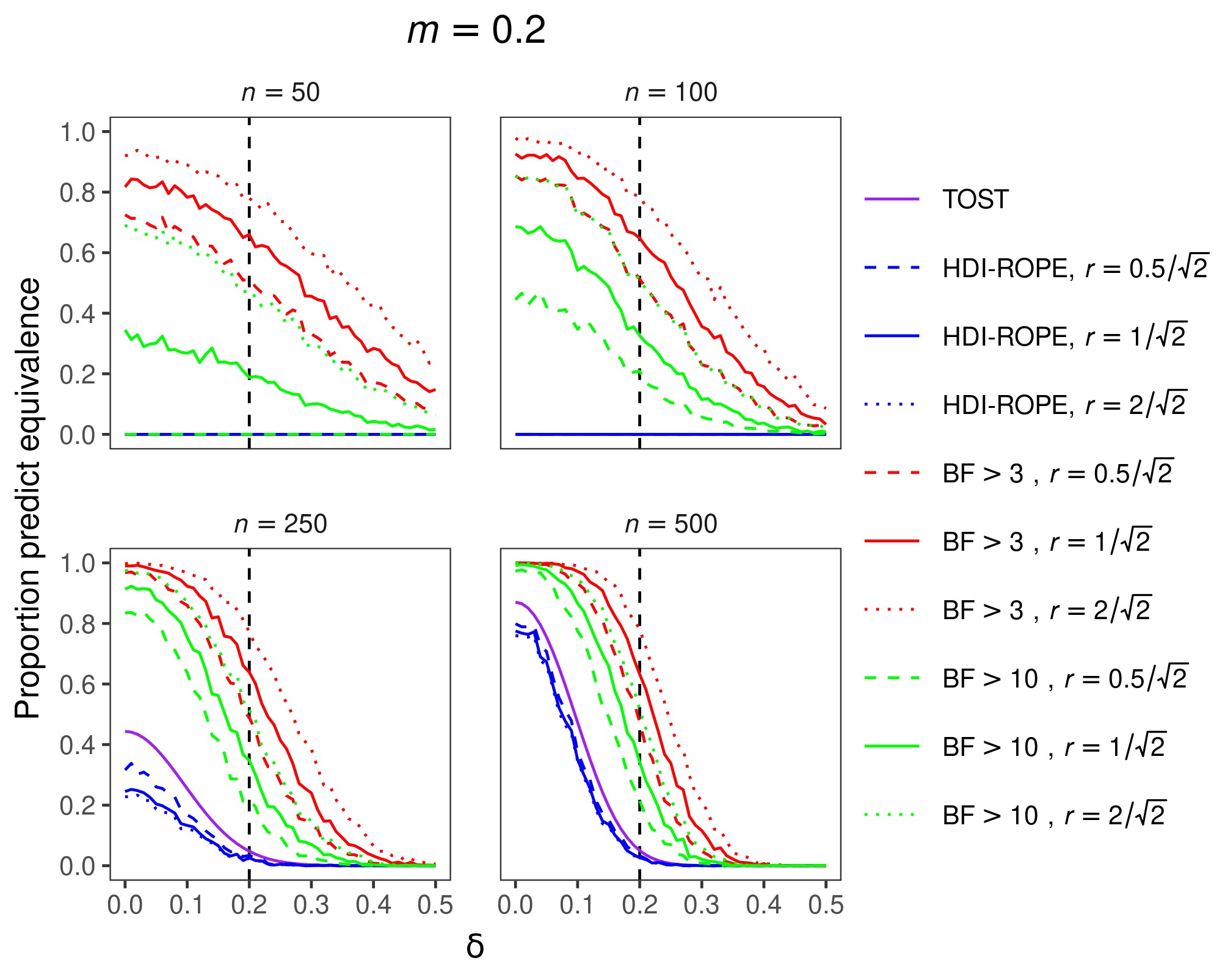 Making decisions based on small samples should generally be avoided. If possible, more data should be collected before making decisions. However, sometimes sampling a relatively large number of cases is not feasible. In that case, the use of Bayes factors might be preferred because they display some discrimination capabilities. In contrast, TOST and HDI-ROPE are maximally conservative. For large sample sizes, all three approaches perform almost optimally when the population effect size is in the center of the equivalence interval or when it is very large (or low). However, the BF approach results in more balanced decisions at the decision boundary (i.e., where the population effect size is equal to the equivalence margin). In summary, we recommend the use of Bayes factors for making decisions about the equivalence of two groups.

Schuirmann, D. J. (1987). A comparison of the two one-sided tests procedure and the power approach for assessing the equivalence of average bioavailability. Journal of Pharmacokinetics and Biopharmaceutics, 15(6), 657–680.

Maximilian Linde is PhD student at the Psychometrics & Statistics group at the University of Groningen.

Jorge N. Tendeiro is assistant professor at the Psychometrics & Statistics group at the University of Groningen.

Ravi Selker was PhD student at the Psychological Methods group at the University of Amsterdam (at the time of involvement in this project).

Don van Ravenzwaaij is associate professor at the Psychometrics & Statistics group at the University of Groningen.