Linear regression analyses commonly involve two consecutive stages of statistical inquiry. In the first stage, a single ‘best’ model is defined by a specific selection of relevant predictors; in the second stage, the regression coefficients of the winning model are used for prediction and for inference concerning the importance of the predictors. However, such second-stage inference ignores the model uncertainty from the first stage, resulting in overconfident parameter estimates that generalize poorly. These drawbacks can be overcome by model averaging, a technique that retains all models for inference, weighting each model’s contribution by its posterior probability. Although conceptually straightforward, model averaging is rarely used in applied research, possibly due to the lack of easily accessible software. To bridge the gap between theory and practice, we provide a tutorial on linear regression using Bayesian model averaging in JASP, based on the BAS package in R. Firstly, we provide theoretical background on linear regression, Bayesian inference, and Bayesian model averaging. Secondly, we demonstrate the method on an example data set from the World Happiness Report. Lastly, we discuss limitations of model averaging and directions for dealing with violations of model assumptions.

To showcase Bayesian multi-model inference for linear regression we consider
data from the World Happiness Report of 2018. We want to explain the average Happiness of a country using a set of predictors detailed below: 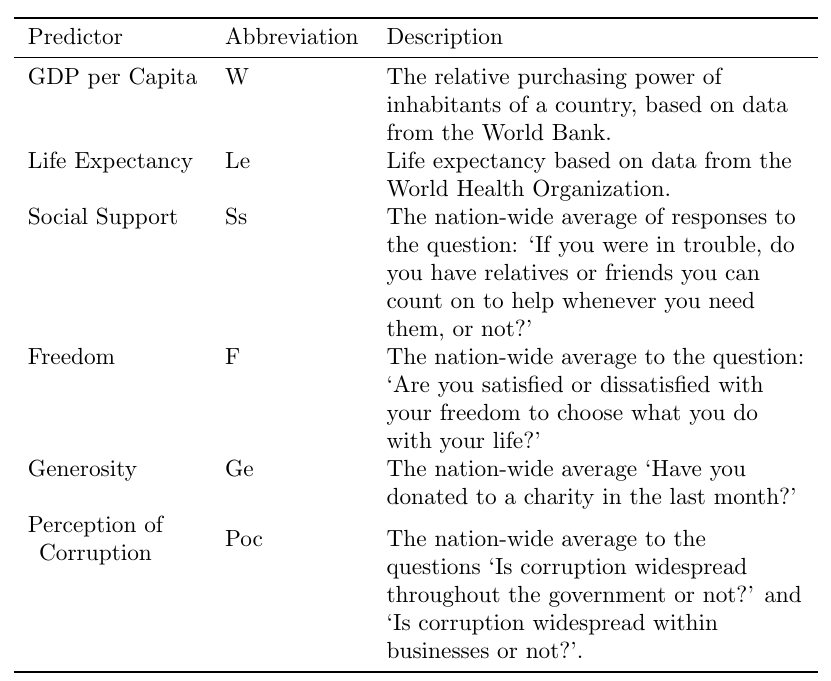 Using the Bayesian Linear Regression in JASP, which is powered by the R package BAS (Clyde, 2020), we observe that the following 10 models perform best.

The 10 best models from the Bayesian linear regression for the World Happiness Data. The leftmost column shows the model specification, where each variable is abbreviated as in the Table above. The second column gives the prior model probabilities; the third the posterior model probabilities; the fourth the change from prior to posterior model odds; the fifth the Bayes factor of the best model over the model in that row; and the last the R2 , the explained variance of each model.

Rather than making an all or nothing decision for a single model, Bayesian model averaging allows us to examine the aggregate results. That is, we weigh the parameter estimates of each model by the posterior model probability and obtain a weighted average that accounts for the uncertainty across models.

The result is a model averaged posterior distribution over parameters. We can summarize this distribution in a table,

Or display the density in a figure:

The model-averaged posterior of Wealth expressed in GDP (left) and Generosity (right). In the left panel, the number in the bottom left (~0.03) represents the posterior exclusion probability. In the right panel, the posterior exclusion probability is much larger (~0.89). In both panels, the horizontal bar on top represents the 95% central credible interval. Figures from JASP. For details see the preprint.