Bayesian inference offers the pragmatic researcher a series of perks (Wagenmakers, Morey, & Lee, 2016). For instance, Bayesian hypothesis tests can quantify support in favor of a null hypothesis, and they allow researchers to track evidence as data accumulate (e.g., Rouder, 2014).

However, Bayesian inference also confronts researchers with new challenges, for instance concerning the planning of experiments. Within the Bayesian paradigm, is there a procedure that resembles a frequentist power analysis? (yes, there is!)

In this blog post, we explain Bayes Factor Design Analysis (BFDA; e.g., Schönbrodt & Wagenmakers, in press), and describe an interactive web application that allows you to conduct your own BFDA with ease. If you want to go straight to the app you can skip the next two sections; if you want more details you can read our PsyArXiv preprint.

What is a Bayes Factor Design Analysis (BFDA)?

As the name implies, Bayes Factor Design Analysis provides information about proposed research designs (Schönbrodt & Wagenmakers, in press). Specifically, the informativeness of a proposed design can be studied using Monte Carlo simulations: we assume a population with certain properties, repeatedly draw random samples from it, and compute the intended statistical analyses for each of the samples. For example, assume a population with two sub-groups whose standardized difference of means equals δ = 0.5. Then, we can draw 10,000 samples with N = 20 observations per group from this population and compute a Bayesian t-test for each of the 10,000 samples. This procedure will yield a distribution of Bayes factors which you can use to answer the following questions:

The figure below shows the distribution of default Bayes factors for the research design from our example using evidence thresholds of ⅙ and 6. This means that Bayes factors smaller than ⅙ are considered as evidence for the null hypothesis and Bayes factors larger than 6 are considered as evidence for the alternative hypothesis. Note that the only function of these thresholds is to be able to define “error rates” (rates of misleading evidence) and appease frequentists who worry that the Bayesian paradigm does not control these error rates. Ultimately though, the Bayes factor is what it is, regardless of how we set the thresholds. From Figure 1, you can see that the proposed research design yields about 0.4% false negative evidence (BF10 < ⅙) and 20.1% true positive evidence (BF10 > 6). This means that in almost 80% of the cases the Bayes factor will be stranded in no man’s land.

Figure 1: Distribution of Bayes Factors for a data generating process (DGP) of δ = 0.5 in a one-sided independent-samples t-test with n = 20 per group.

In sequential designs, researchers can use a rule to decide, at any stage of the experiment, whether (1) to accept the hypothesis being tested; (2) to reject the hypothesis being tested; or (3) to continue the experiment and collect additional observations (Wald, 1945). In sequential hypothesis testing with Bayes factors (Schönbrodt et al., 2017), the decision rule can be based on the obtained strength of evidence. For example, a researcher might aim for a strength of evidence of 6 and thus collect data until the Bayes factor is larger than 6 or smaller than ⅙.

This implies that in sequential designs, the exact sample size is unknown prior to conducting the experiment. However, it may still be useful to assess whether you have sufficient resources to complete the intended experiment. For example, if you want to pay participants €10 each, will you likely need €200, €2000, or €20,000? If you don’t want to go bankrupt, it is good to plan ahead. [As an aside, a Bayesian should feel uninhibited to stop the experiment for whatever reason, including impending bankruptcy. But, as indicated above, by specifying a stopping rule in advance we are able to “control” the rate of misleading evidence].

Given certain population effects and decision rules, a sequential BFDA provides a distribution of sample sizes, indicating the number of participants that are needed to reach a target level of evidence. The sequential BFDA can also be used to predict the rates of misleading evidence, that is: How often will the Bayes factors arrive at the “wrong” evidence threshold?

In order to make it easy to conduct a BFDA, we developed an BFDA App.

To demonstrate some of the app’s functionality, we will now conduct a sequential BFDA in ten easy steps. Note that the explanation below is also provided in our PsyArXiv preprint.

Figure 2: Screenshot from the BFDA App. Get an overview on expected sample sizes in sequential Bayesian designs. 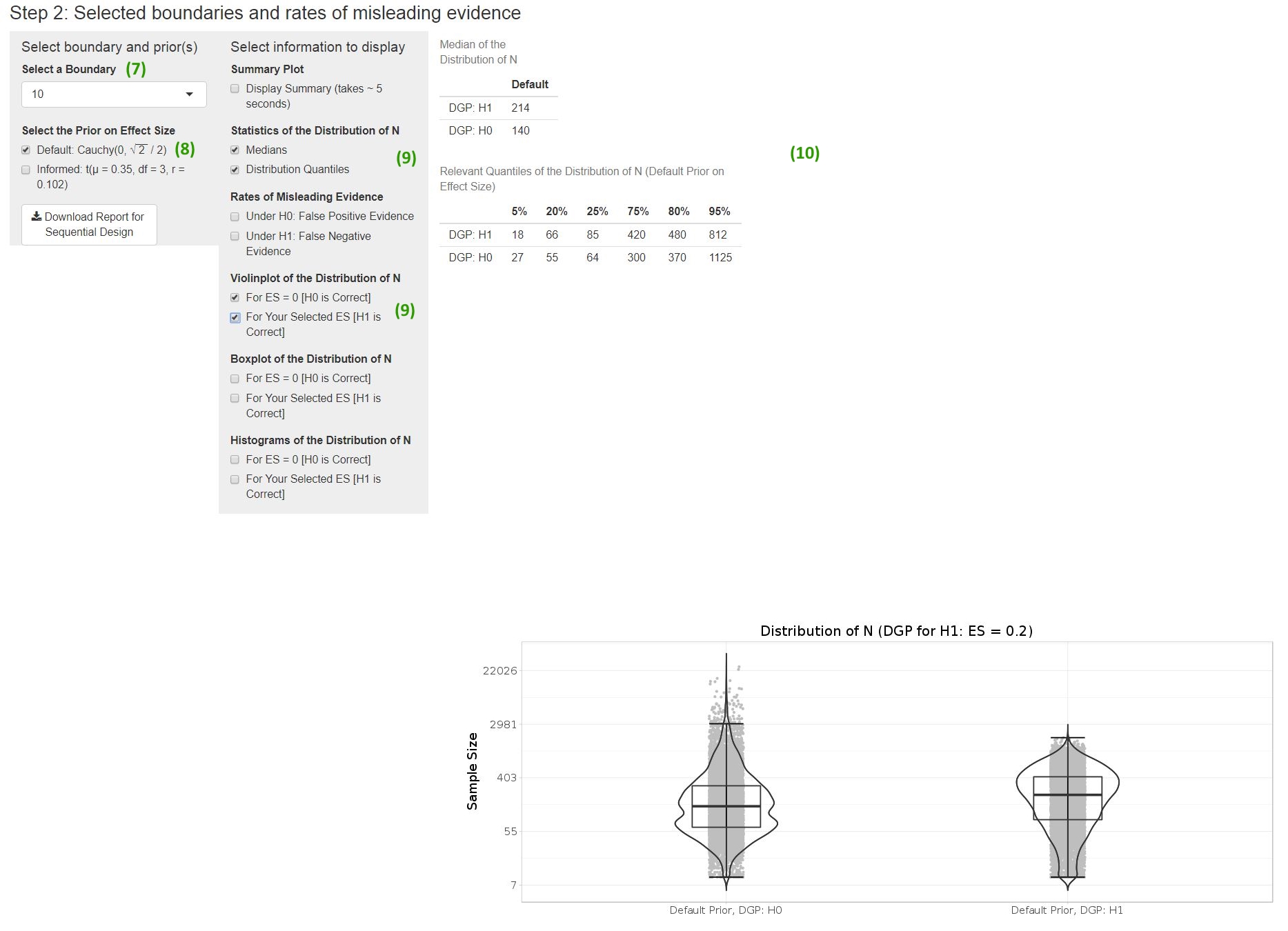 After inspecting the overview plot, you can continue with step 2 in the app (displayed in Figure 3).

Now you have arrived at your destination. You know how many participants you can expect to test in order to obtain strong evidence. You can summarize the results from the App in a proposal for a registered report; if you want to be extra-awesome you can use the App to download a time-stamped report (click on the “Download Report for Sequential Design” button) and attach it to your submission. This was easy, wasn’t it?

Excited about the opportunities of Bayes Factor Design Analysis? Check out our recent PsyArXiv preprint for more information.

I want to thank Felix Schönbrodt, Quentin Gronau, and Eric-Jan Wagenmakers for their advice on the project and for their comments on earlier versions of this blog post.

Angelika is a psychology master student at LMU Munich and does a research internship at the Psychological Methods Group at the University of Amsterdam.

November 16 - 2017
For Christian Robert’s blog post about the bridgesampling package, click here. Bayesian inference is conceptually straightforward: we start with prior…